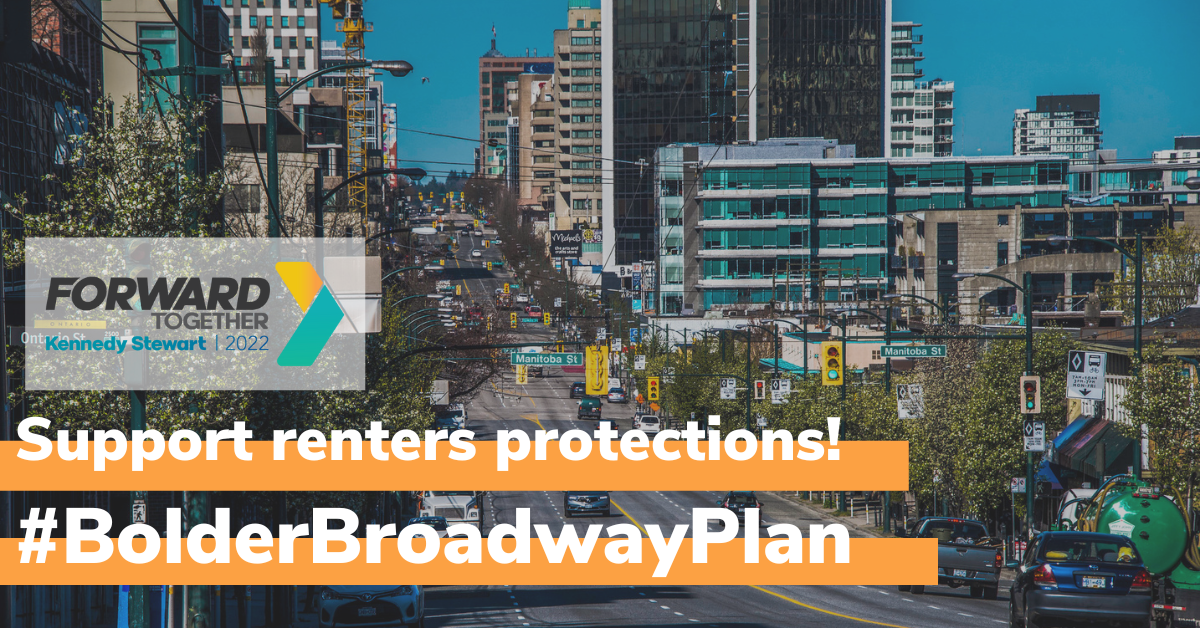 Mayor Stewart today unveiled his plan for a bolder Broadway Plan featuring the strongest renter protections in Canada while making room for 50,000 new neighbours. The plan means no tenant along Broadway today will see their rents go up in the event of redevelopment, and most will even see it go down.

“Broadway is home to one in four Vancouver renters, and my promise to each of you is that the Broadway Plan will not push you out or raise your rents,” said Mayor Stewart. “Vancouver’s prosperity belongs to all of us, that’s why my bolder plan for Broadway makes room for 50,000 new neighbours while protecting everyone who lives there today.”

The current draft Broadway Plan includes enhanced protections for tenants in buildings going through redevelopment including:

“For those already paying high rents along Broadway, this means you could see your rents fall, once you move back to your new building,” said Mayor Stewart. “But for those paying low rents today, I want to go even further and make sure you won’t have to fear paying more as we renew and expand housing along Broadway.”

The Mayor’s plan calls for those enjoying these kinds of low rents to have the right to return to the new building at the same rent as before, protecting all renters, especially those with long tenure.

“The bottom line is that no renter along Broadway will see their rents go up due to redevelopment, and many will even see it go down,” said Mayor Stewart. “A bolder Broadway plan is possible, one that adds 50,000 new neighbours while protecting each and every current renter with the strongest tenant protections in Canada.”

The City’s current Tenant Relocation and Protection Policy contains many protections for tenants, including compensation in the event they need to leave due to redevelopment. Tenants are supported with help finding new housing, $1,000 in moving expenses, and compensation based on length of tenure.

Under the draft Broadway Plan, additional protections are proposed including:

For most tenancies today along Broadway, this means that renters would see their new rents go down once they returned to the new building. Here’s an example:

But in some cases, long-tenured renters who are paying rents significantly below market need more protection. Mayor Stewart’s plan is to ensure no one has their rents increase. Here’s another example: