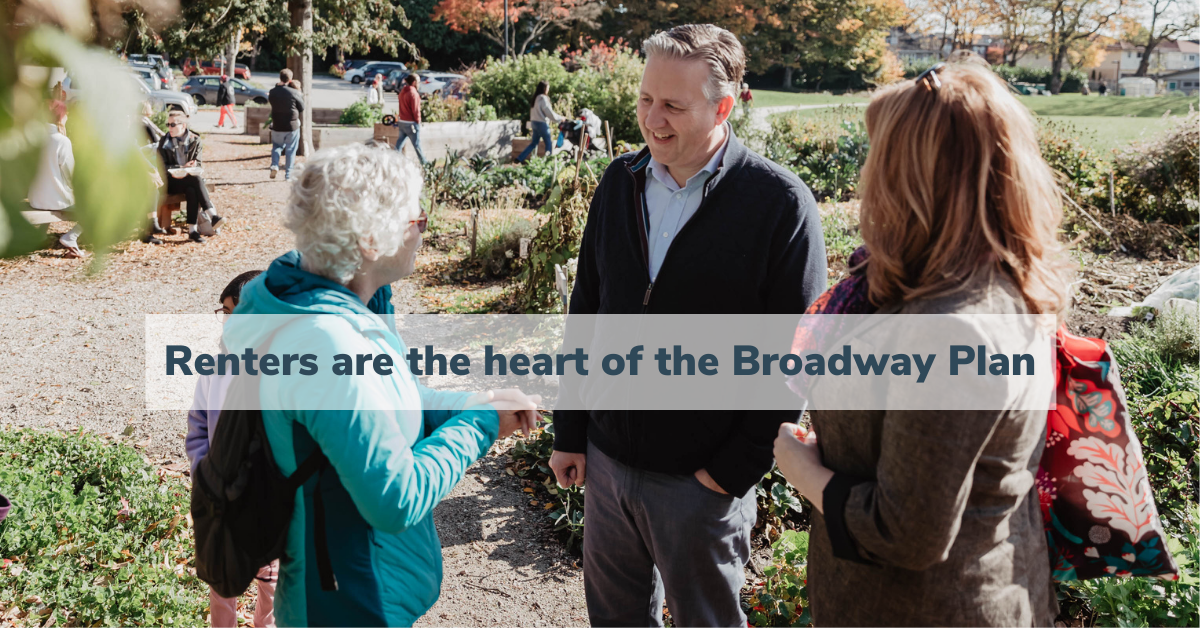 Experts across housing, health care, and the economy joined Mayor Kennedy Stewart to support the upcoming Broadway Plan and speak to its benefits for renters, buyers, and business owners. Luke Harrison, President at Catalyst Community Developments Society, Jill Tipping, President and CEO of B.C. Tech, and Fernando Pica, Chief Financial Officer, Vancouver Coastal Health all echoed Mayor Stewart’s call for a bold Broadway Plan that includes the strongest tenant protections in Canada while making room for 50,000 new neighbours over the next 30 years.

“The bottom line is that no renter along Broadway will see their rents go up due to redevelopment, and many will even see it go down,” said Mayor Stewart. “We are putting renters at the heart of this plan because they make up the soul of our city, drive local business, and strengthen our health care sector.”

“BC Tech is delighted to lend the support of BC’s technology sector for advancement of the Broadway Plan,” said Jill Tipping, President and CEO of B.C. Tech. “To thrive in the modern economy we must embrace affordability solutions like the Broadway Plan, that support tech companies and tech talent to come to Vancouver, to grow in Vancouver and to stay anchored in Vancouver."

“The Broadway Corridor contains some of BC’s most important health care facilities. Vancouver Coastal Health hospitals and surrounding facilities provide critical health care to residents throughout BC,” said Fernando Pica, Chief Financial Officer and Vice President of Corporate Services at Vancouver Coastal Health. “Housing affordability is critical to the 26,000 workers that provide care to our population. The Broadway Plan is key to attracting and retaining health care workers who reside in nearby communities or are considering moving closer to work.”

“I want to congratulate the Mayor and City Staff for a bold plan that puts renters and liveability first,” said Luke Harrison, President at Catalyst Community Developments Society. “This is the spark the city needs coming out of a global pandemic when people have been leaving urban centres. This plan does the heavy lifting to create sorely needed social and rental housing stock and maximising density where it generates the lowest cost of living. This will bring change to the Broadway neighbourhood, and with best in class renter protections I’m excited to see net new social and affordable housing that will arise from this project.”

Mayor Stewart and Councillors will meet next week to discuss revisions to the Broadway Plan including the Mayor’s call for current renters to have the right to return to new buildings at the same or lower rent as before. The Mayor will also move to see a robust tenants rights education campaign rolled out to ensure every renter understands how the new Broadway Plan protects them.

The current draft Broadway Plan includes enhanced protections for tenants in buildings going through redevelopment including:

Take action to support the plan

The City’s current Tenant Relocation and Protection Policy contains many protections for tenants, including compensation in the event they need to leave due to redevelopment. Tenants are supported with help finding new housing, $1,000 in moving expenses, and compensation based on length of tenure.

Under the draft Broadway Plan, additional protections are proposed including:

For most tenancies today along Broadway, this means that renters would see their new rents go down once they returned to the new building. Here’s an example:

But in some cases, long tenured renters who are paying rents significantly below market need more protection. Mayor Stewart’s plan is to ensure no one has their rents increase. Here’s another example:

That the following be added to Appendix A, section 12.1.3, “Right of First Refusal”: Offer the right of first refusal to existing tenants to return to a new rental unit at a 20% discount to city-wide average market rents by unit type for the City of Vancouver as published annually by the Canada Mortgage and Housing Corporation (CMHC) in the Rental Market Report, or at the tenant’s current rent, whichever is less.

That further to Appendix A, section 12.1.9, Council direct staff to conduct a robust education and awareness campaign to ensure renters in the Broadway Plan area understand the enhanced protections they are entitled to, and further that staff explore creating dedicated liaisons for tenants in the area through the Renters Centre.

That Council direct the Mayor to write the Premier requesting assistance from his government concerning current provincial funding opportunities and regulatory adjustments in order to expedite the approval and permitting of rental and social housing that substantially comply with the policies contained within the Broadway Plan.

That Council direct staff to pursue ways to expedite permitting and development within the Broadway Plan area.