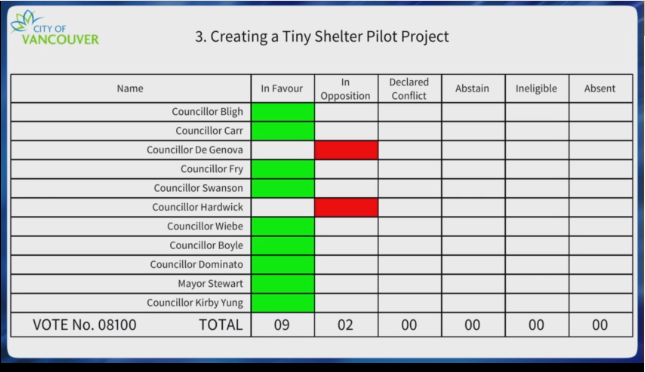 Feb. 9, 2022 - Vancouver - Mayor Kennedy Stewart said the Non-Partisan Association (NPA) is turning its back on the homeless after the NPA voted against a $1.5-million housing pilot program that would create homes for unsheltered residents.

“NPA leaders have shown that when it comes to tackling the homeless crisis, they would rather turn their backs on our most vulnerable residents than pursue solutions to get people off the streets,” said Mayor Kennedy Stewart. “Their opposition to the Tiny Homes pilot makes it clear that when it comes to housing vulnerable residents, the NPA under Jonathan Coupar is abandoning them .”

While the NPA voted against the proposal, a majority of council said yes to a staff recommended pilot that includes building  10 tiny shelter structures to house up to 20 homeless residents over two years on the parking lot next to the Klahowya Tillicum Lalum shelter at 875 Terminal Ave. The City of Vancouver will use money collected from the newly tripled Empty Homes Tax, which the NPA also opposed, to provide all capital and operating funding, as well as resources to support an evaluation of the pilot.

“I am happy a majority of Council voted to move Vancouver forward by using the Empty Homes Tax to build housing for the most vulnerable,” said Stewart. “When I tripled the Empty Homes Tax in the fall of 2020, it was to put more funds into new housing solutions to address our homeless crisis, not to earn interest in a bank account.

Under the leadership of Mayor Stewart, the Tiny Homes pilot is part of a comprehensive approach to Vancouver’s housing crisis that has so far resulted in a record $1-billion secured to build 10,000 homes to give hope to seniors, working families and our most vulnerable neighbours.