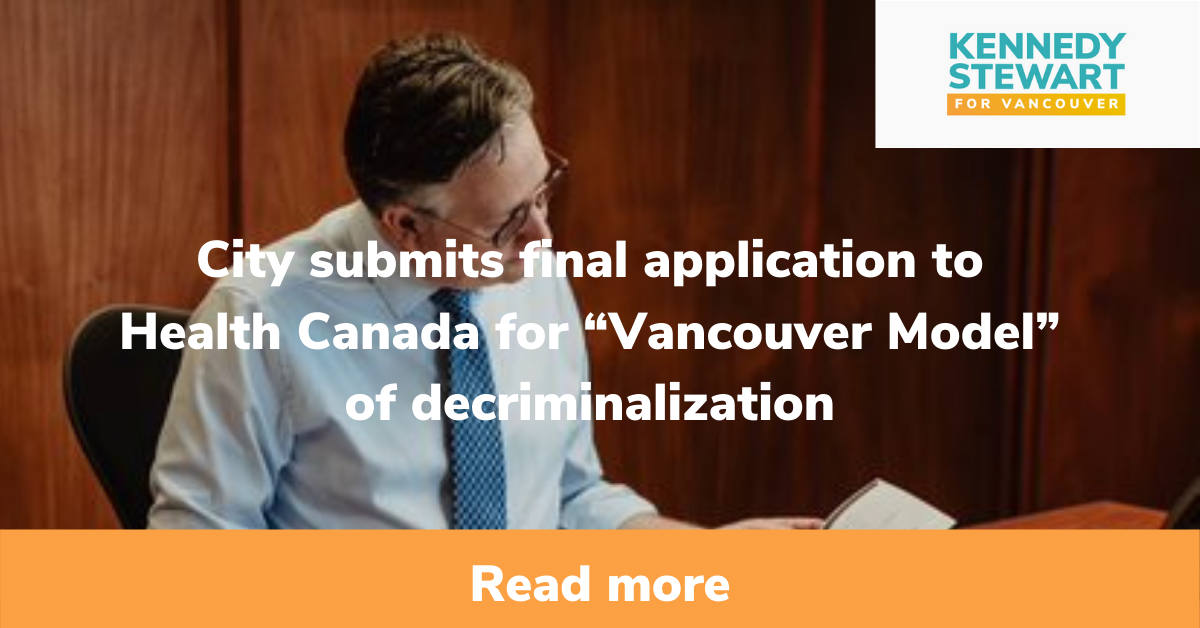 Today, as part of an ongoing and iterative process, the City of Vancouver announced that the final proposal for the “Vancouver Model” of decriminalization of simple possession has been submitted to Health Canada. This iteration of the submission outlines the City’s proposed approach which is based upon personal possession thresholds, under which no criminal sanctions would apply, paving the way instead for a health-focussed approach to substance use.

“The City of Vancouver is the first jurisdiction in Canada to apply to Health Canada for a health exemption to the Controlled Drug and Substances Act to decriminalize simple possession because we know addressing the devastating overdose crisis and saving lives requires fully embracing a health-centred approach,” said Mayor Kennedy Stewart.

The City of Vancouver, the Vancouver Police Department, and the Office of Vancouver Coastal Health’s Chief Medical Health Officer have worked together to determine initial thresholds based on science and research.

“The proposed thresholds in the submission are only a starting point,” said Ted Bruce, Public Health Consultant for the City of Vancouver. “We anticipate that they will evolve as further data becomes available and increased consultation with people with lived experience occurs to make sure the Vancouver Model achieves its goal of reducing stigma, reducing risk, and connecting people to care.”

The third iteration of the Vancouver Model provides detailed thresholds levels for 15 common substances and would lead to dramatic reductions in seizures by police. At the same time, the Vancouver model is unique in the world with no administrative or financial penalties – instead the Model stresses voluntary referrals and contact by health care workers instead of police.

With the full application now with Health Canada, the City of Vancouver and its partners await a swift response from the Federal Government and stand ready to rapidly implement the Vancouver Model once approved.